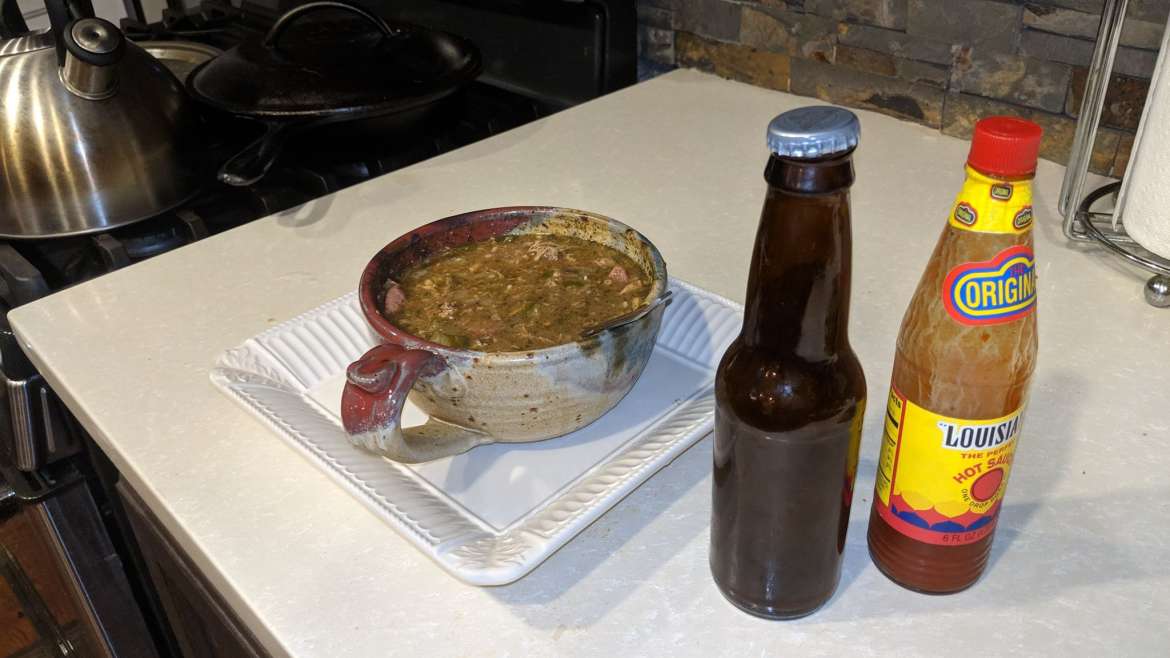 My dad was the typical dad, I think, when it came to comparing how HE grew up to how WE grew up.  Most of you know what I mean……  “I had to walk to school every day and it was up hill both ways”…. “I had to pick up pecans after school to have money to buy shoes”, etc.  I see that in my thinking while looking at Grace and the kids these days.  “I had to talk on a phone connected to the wall”…. “I had to type my papers on a typewriter and use correction ribbon if I made a mistake”….  “I only had three channels to watch on TV and if the president was talking, we had nothing!”

I know there is truth in how I see it different from how this generation sees things, so I am sure there was some truth in the stories my dad would tell.  Recently, I have learned a very valuable lesson in respecting one of his stories that I always put in the back of my mind as outlandish.

The story went kind of like this: “When I was a kid, we had to go and pick the leaves off a sassafras tree and PawPaw (our name for our Grandfather) would make us sit there and pull every stem and vein out of the leaf.  We would then dry those leaves and grind them up very fine to make File’ powder.  It took a thousand leaves to make one tablespoon”.   This seemed preposterous to me.  Why would anyone spend all of those hours on something so insignificant?  He would also tell how the File’ was then put into dark bottles and stored in a cool, dry place.  In my grandfather’s case, the dark bottle just happened to be a dark beer bottle.

The centuries old idea of grinding dried, deveined, sassafras leaves and using them as a soup base came from the Louisiana Choctaw Indians.  The Choctaws called this spicy herb Kombo.

See, my dad would tell us this story every time he was cooking gumbo.  He cooked gumbo the same way his dad cooked it and I am sure the same way his dad’s dad and so on cooked it.  Our family has been in the Louisiana area since before the French owned the territory that was eventually sold to Jefferson in the Louisiana Purchase.  Our 8 or 9-times great grandfather married into a Native American tribe and his grandsons even served as interpreters between the Native Americans and Jefferson’s US government once the Louisiana territory became part of the United States.

This is important, because now I know that Kombo Soup was a special occasion meal enjoyed by the Choctaws in the 17th and 18th centuries.  The very word Gumbo probably found its origins here, and it is very possible that my ancestors may have been among the first non-Native Americans to make Gumbo.  Our family has origins in France (I am sure it was pronounced Grappe’ then) and roux has it’s origins in France.  The combination of Kombo soup and the added French roux make up today’s version of Gumbo.

The process of creating this amazing Cajun delicacy took a whole day.  Heck, he would spend an hour and a half just making the roux (which is just a flour and oil mixture slow fried).  He would put my brother and I on a stool so we could see the top of the stove and we would take turns constantly stirring this beautiful concoction until it was a “dark peanut butter color”.  We had to be careful not to scorch it, or we had to start this slow process over again.  There was always that magical moment when the roux was cooked properly, and we would get a proud look from dad.  These looks were not dealt out easily or often as a kid.

He then would explain that the next part of the process was getting the “Holy Trinity of Cajun food sautéed”.  This was equal parts red onion, green bell pepper and celery that had been diced into the smallest possible chunks.  This mixture is the base for most Cajun foods and finds its origin in the very early days of French Cajun/creole cooking. The smell in the kitchen is unforgettable when you have fried flour and the trinity of vegetables making a delicious aroma.  He had a secret ingredient that made his trinity better than others.  Garlic.  It’s a simple thing, but it makes all the difference.  I now wonder if my grandfather taught him this or if it was his little addition to the family recipe.  I guess it wasn’t such a secret, because people now refer to adding “the pope” to the holy trinity when adding garlic.

Once the holy trinity, along with the minced garlic was cooked, it was put in the stock pot with the roux.   The simple form of gumbo always involved chicken.  A whole chicken boiled to perfection and seasoned with whatever seemed right and was available on hand.  Black pepper, salt, onion powder, garlic powder, Tony’s Cajun seasoning, cayenne pepper and a little parsley were always good.  These seasonings would change a little if it was seafood gumbo, but I can’t give away all of the family secrets.  You would take the chicken out of the broth and add the broth to the flour and sautéed vegetables.

This is when the magic would happen.  We would always have something special with the chicken in the gumbo, based on what was left in the freezer from hunting season.  Squirrel, rabbit, or duck, but never deer.  Never beef.  These are unacceptable meats for gumbo.  He would fry the squirrel or rabbit on the stove and generally keep them whole.  When I say whole – I mean the head was still attached!  Once fried (more flour involved and tons more spices added), the squirrel or rabbit would go in the stock pot whole, which by this point was at FULL BOIL.  As the water rolled, you could see onions and pieces of bell pepper and bits of chopped up chicken come to the top, roll through the water and then disappear deep into the dark brown pool of goodness.

There is a vegetable that makes it into the gumbo on occasions and not on others.  Okra.  See the word “gumbo” is actually from Africa.  It originates from the Angolan word “kingombo” which means okra soup.  It is cool that the word hasn’t really changed much from its origin.  I like to think they were saying “Gumbo for the King” or “King Gumbo”.  Okra is actually a thickening agent.  This is generally only used when File’ is not available.  File’ is also a thickening agent, but unlike Okra, it adds an unbelievable pungent, spicy flavor and texture to the gumbo that is unmatched by the simple veggie.  Once I was grown and my grandfather and dad had passed, File’ was much harder to come by, so okra had to be used in substitution. If both File’ and Okra are not available, Gumbo is served over rice and the rice becomes the thickening agent.

The last thing added was always fried andouille sausage.  This had to be chipped up into small pieces and fried in a black skillet.  You would fry it until it had a crispy layer of blackness on it, but not quite burned.  It seemed the secret to Cajun cooking was cooking stuff right up to the point that if it cooked for one more second, it would be too late.  Ruined.  But it was never burned, and to this day, I have made hundreds of gumbos and never once burned any part of it.  The sausage would then go into the rabbit, chicken, onion, bell pepper, fried flour, celery, garlic concoction and then we would wait.

The longer the gumbo gets to cook, the better the flavor.  This gives it more time for all of the flavor profiles to mix together.  This is also where I learned the purpose of a LID on a stock pot.  At least what the purpose is when cooking gumbo.  It is a lesson I have carried all my life and in all of my cooking.  My dad would say “you want the gumbo to cook down just enough where the water reduces, but does not form a gravy.”   If you want it to reduce more, you leave the lid off.  If you just want it to cook and not reduce, you put the lid on (or keep adding water or broth).

This always helps with the most important idea surrounding gumbo.  Visitors.  Generally, if you are cooking a big pot of gumbo, the word spreads.  People want to come eat Grappe Gumbo and magically, you ALWAYS have enough.  All you need to do is add more water (or broth if you have it).  You can stretch a pot of gumbo a country mile.

As I have grown older, it is more evident that all of the elements of our family gumbo has deep ancestral roots from France, Native Americans and early Creole/Cajuns. Just this past Christmas, I took Kelly and Grace to Louisiana to meet the family for the first time.  While we were there, my dad’s older brother, Buford, invited us to come eat.  I bet you can’t guess what he spent the whole day cooking in preparation for our first ever visit.  As we sat around the table, my Uncle Buford told a story I had heard my whole childhood.  He told us about a sassafras tree that he gathers leaves from to this day.  The same tree he got the leaves from 60+ years ago as a child with his father.  He told us how the tree was so tall that you could barely even get to the leaves.  He then painstakingly removed the leaf veins, dried the sassafras and then ground them up into a fine talc-like powder.  He then presented me with a bottle of this beautiful, delicious, family-historical powder.  It was in a brown Coors bottle.  It may be one of the best gifts I have ever received.  Someday, I plan to visit and find that very sassafras tree.  Maybe pick a handful of leaves just to know what it was like to de-vein and dry them into a powder.

This past weekend, we had the privilege of Kelly’s cousin Jon and his family visiting from Tennessee.  It was a cooking bonanza for two days.  Jon’s youngest daughter, Kaylee, expressed to me that she loved to cook, so on Saturday night, I let her cook as I taught.  She cooked Gumbo.  I explained all the stories about File’ and the Holy Trinity and how to cook Roux without burning it.  We didn’t have squirrel or rabbit in the freezer, so we just had chicken gumbo with Andouille sausage.  We cooked it with Okra.  We also served it over rice.  And we had Uncle Buford’s Gumbo File’, straight out of the brown Coors bottle.

It is important that we pass it on.  The kids today have phones that connect to the internet, they can Facetime each other live and find any recipe they want at the touch of a button.  I am sure they get tired of hearing stories about the hardships we had when we were kids and how they have it so easy.  In this internet age, some of the family stories get lost.  Some of the traditions don’t get passed down.  But on one special Saturday night, I got to tell about my family and teach a 15-year-old cousin from Tennessee how to make Gumbo the Grappe way.  Maybe someday she will pass it on to the next generation.