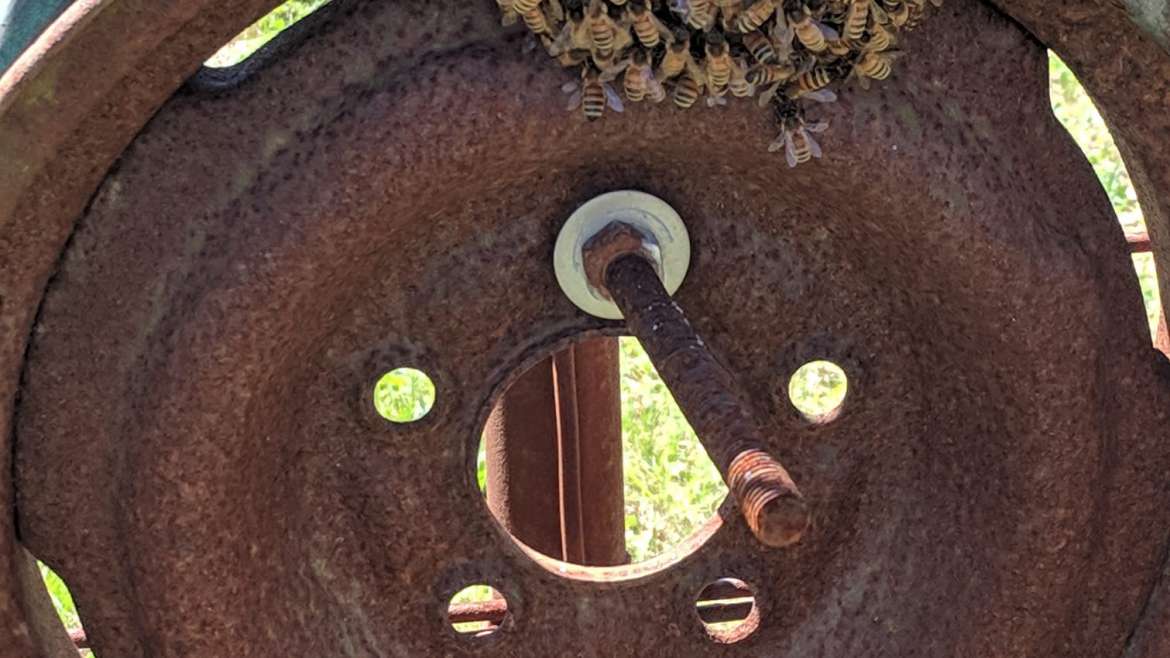 Over the next month, we will have several new members of the Farm family that are coming home.  It is exciting and a little frightful because we want to provide proper food, housing and care for all of our new animals.  In preparation for the new additions to the farm, we have spent months reading, going to meetings, talking to people, watching Youtube videos and visiting farms.

By the end of May, we will bring home two Myotonic goats, five pigs and two hives of honey bees.  We also will have our first batch of chicken eggs hatch from the incubator.  It will be a busy time at Forevermost Farms.  It has been exciting to learn all about everything, but the most interesting subject for me has been the honey bees.

This unique little insect is an amazing gift from God.  Scientists believe that they have been around for about 120 million years, and the oldest bee found was a bee embedded in amber from a mine in Myanmar dating 100-million-years old.   Today, there are more than 16,000 species of bees known to exist.  These bees are organized into seven families.

Honey bees are the only insects that produces food that is consumed by humans.  (Honey does not spoil or go bad – even over centuries) Most of us are aware of this, especially when we pour some of this amazing liquid over a biscuit or mix it into our hot tea as a sweetener.  What most of us probably do not know, is the fact that honey is the perfect food.  It contains everything you need to survive:  anti-oxidants, vitamins, minerals and even water.   The enzymes found in honey helps in food digestion and helps to keep your immune system working properly.   Honey has antibiotic properties and has many other medicinal values.  It is used for burns, stomach ulcers, infectious wounds, diaper rash and has long been the go-to relief for sore throats when mixed with lemon.  Honey also will help with seasonal allergies if you consume honey produced by bees from the same area in which you live.

A cool attribute about honey is its’ flavor.  For most of my life, I simply thought honey was honey flavored, but the honey takes on the flavor of the flower from which the bee gathers pollen and nectar.  At Forevermost farms, we are designing sections of our farm specifically keeping this in mind.  Clover honey is a mild honey that most people enjoy, so we are planting two acres of our pasture with clover.  We are also making a native Arkansas flower garden for our bees and will also be planting watermelon, cantaloupe and pumpkins specifically for the honey bees.  An interesting fact is that each worker bee only produces about 1/12th teaspoon of honey in her lifetime.  A hive of bees will travel over 90,000 cumulative miles to collect about 2 pounds of honey, and each bee will visit between 50-100 flowers during one trip away from the hive.

Watermelons provide a perfect example of the importance of pollinators like honey bees.  Each watermelon vine will produce both male and female flowers.  Pollinators will visit the flowers and transfer pollen from one flower to the next.  Each watermelon female flower must be pollinated 5 times before it will turn into a fruit.  As time goes by, our plan is to plant flowering trees such as dogwoods, red buds and cherry along the tree-line behind our bee pasture.

Honey bees have 170 odor receptors.  This is a primary form of communication which includes recognition of related bees, social communication within the hive, and the ability to differentiate floral varieties and whether a flower carries pollen or nectar.

The actual colony of bees gets even more interesting.  One colony can consist of 20,000-60,000 honeybees, with one queen.  The queen is larger and can live about 5 years.  The worker bees in the hive are all female and do all of the work.   They produce honeycomb through the consumption of honey produced from the collection of flower nectar.  To produce one pound of beeswax, six to eight pounds of honey must be consumed.  These hexagon shaped cells are used for honey storage as well as to lay eggs.

Once the queen returns to the hive, she waits about 24 hours before the sperm is transferred from the oviducts into her spermatheca.  She can then begin the process of laying eggs.  She can lay about 2500 eggs per day and she has control over whether the eggs she lays will be male or female.   If she lays the egg and decides not to fertilize it, the larva that is produced will become a male “drone”.  If she chooses to fertilize the egg, it will become a female “worker” bee.  The males will only have the genetic material of the mother, while the females will have genes from mother and father.  The male “drone” has no stinger and does not work.  Their only job is to mate with the queens.  Before winter, or if food becomes scarce, the female bee will push the unneeded male bee from the hive.

The female “worker” bees have different jobs based on her age.  As her biological “clock” ticks, she takes on different roles.

When the bees are a little older, they become in charge of removing dead bees.  These bees are called the “undertakers”.  They dispose of the dead bees’ corpses as far from the hive as possible.  The undertakers also quickly remove any diseased or dead broods before they can become a health threat to the rest of the colony.

The next job in the life of a bee is that of a “Nurse”.  These bees are charged with incubating and caring for the developing larva located in the brood cells.  They deposit nectar and pollen into the brood cells for food.  They also deposit honey into some of the cells of the hive for the colonies’ food.  Once the colony determines there will be a need for a new queen, these nurse bees will choose a few cells and feed the larva a special substance called “royal jelly” instead of the normal nectar and pollen.  The royal honey is a milky concentration secreted from the nurses’ head.  Only the larva fed this special substance will develop into a larger queen.  If the hive is infected with a parasite, the nurse bees will selectively eat honey that is high in antibiotics and will feed this to other members of the colony.  They “prescribe” different types of honey to other bees based on their infection.

The last task of a bee before becoming a forager is to be the hive “guard”.  These guards inspect every bee that comes into the hive.  They are looking for a familiar scent, before letting the bee into the hive.  They will also find any “cracks” in the hive and guard that against threat.  If the guard is threatened, it will sting the intruder.  When the bee stings, the stinger is pulled from its body, it tears the abdomen and produces an alarm pheromone that alerts the other bees of danger.

When bees are about 12 days old, they are mature enough to produce beeswax.  The wax flakes they produce are used to build new wax comb and to cap honey cells and cells containing larva.  A large amount of nectar and pollen must be consumed to produce the wax flakes.

When they are about two weeks old, they become foragers.  During this point in their lifespan, they can make about 10 trips a day that range in distance up to 3 miles.  They are in search of nectar, water, pollen and propolis (a resin based “glue” gathered from tree buds, sap flows and other  sources).  The nectar is brought back to the hive and fed to the adult bees and passed on to worker house bees to be deposited into honeycomb cells.  The nectar will turn into honey and the worker bees will use wax to cap the comb.  Nectar is a carbohydrate needed by the bees as an energy source.  Pollen is gathered by some bees on their foraging flights.  The bees that collect pollen are equipped with a special pollen basket (corbicula) that they fill with pollen and bring back to the hive for protein and fats.  The pollen is mixed with water and nectar in the bees mouth.  This causes the pollen granules to “grow” and produce “bee bread” which is stored in honeycombs.  Propolis that is gathered is used to seal cracks and to fill in gaps in the hive. The forager bees return to the hive at night.

Some bees are tasked with the job of “temperature controller” of the hive.  They collect water within a short distance of the hive and bring it back and put it on the backs of the “fanning” bees.  These bees fan their wings and create airflow which brings down the temperature of the hive in hot months.  During the winter cold months, they congregate in a cluster for warmth.

Though the queen is considered the most important member of the colony, the worker bees determine when they need a new queen.  This can be based on any number of reasons including space constrictions, poor egg performance or death of the queen.  When the workers determine a need for a new queen, the nurse bees will select a few cells to grow new virgin queens and feed those cells royal honey.  Once a virgin queen emerges, she will then locate other virgin queens and kill them one at a time.  If two virgin queens emerge at once, they will fight to the death and the remaining queen takes over the hive.  Prior to the virgin queen emerging, the worker bees will force the old queen out (in cases of the hive being too full) or kill the old queen.  When the old queen is forced from the hive, half of the worker bees will leave with her and this is called a swarm.    These bees will leave in search of a new home and the remaining virgin queen and workers will start the whole process over.

This whole process is a perfect balance with exactly the right sized honeycombs, the right type of stored cells, a perfectly created food source, the right jobs taken on by the workers and a queen ruling over the hive.  We are more than excited to watch this process take place over the coming months and years and we even caught a small smarm recently with about a thousand worker bees and a queen.  We have been watching them as the workers create their honeycomb in anticipation of brood cells and baby larva being placed by the queen. Hopefully, we can grow our bee colonies and maybe someday, we will have enough bees, producing enough honey,, to share with you.

Yoga on the Farm!