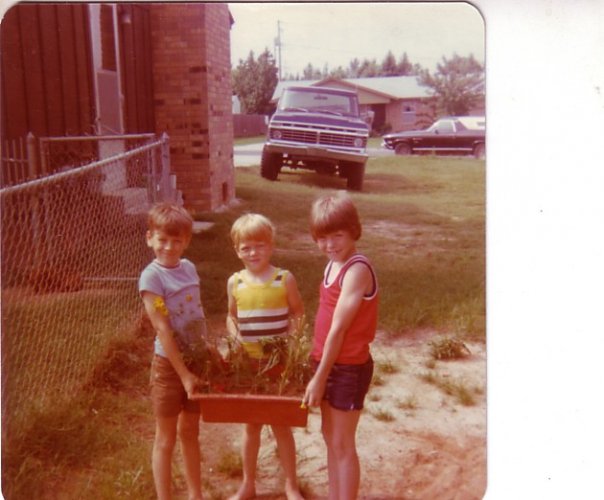 I never would have categorized our family as hillbilly or redneck growing up.  My mom made sure to expose us to as much culture as she could when we were younger.  My brother and I both played baseball and other things that you do when you live in the suburbs.  But roots do run strong and we came from a very small town in Louisiana.  Those country roots never showed more than one late fall evening somewhere between 1976 and 1978.

When I was a small kid, we lived in a manicured neighborhood in a town that grew up around an air force base.  Most of the families that lived in our little suburb were enlisted and young.  We lived in a cul-de-sac.

While we lived in Jacksonville, my dad formed a hunting club with several of his buddies in 1972.  These guys came from all walks of life.  One was a car mechanic, one was a journeyman welder, one worked for the post office, one couple was the epitome of 60s hippies complete with underground home, one was an ex-con that had the most amazing, outrageous “outlaw” personality, and I am not sure what Big Dave did, but I sure loved that man and his infectious smile.

To say that my brother and I were exposed to many different lifestyles as a kid is an understatement.  We hunted and ate deer, rabbit, squirrel, turkey, quail and dove.  These were typically hunted game varieties and perfectly acceptable to have in the freezer.  There were also times we had the opportunity to share in the bounty of “not so normal” game that my dad would kill or the guys from deer camp would share with our families.  I have vivid memories of raccoon, bear, alligator, turtle and even barbequed armadillo.  That is a full story for another time.

We spent almost every weekend of the year with the families from the Rixie Deer Camp and Eating Club.  If it wasn’t some type of hunting season, we were fishing with them at Old River lake or Peckerwood Lake in Stuttgart Arkansas.  Our families became very close friends.  As kids, we had other kids and teenage boys to hang out with and learn from.  Some of these lessons were good, others not so much, but it was a great way to grow up.

The dads in the camp also took the other boys under their wings.  I remember hunting with Buck as a small kid, my brother followed in the footsteps of Harry from deer camp when starting his career as a welder.   Some of the dads helped boys get jobs as they became men.  All the boys had second and third fathers to look up to and go to for help.

On that fall evening in Jacksonville between 1976-1978 was one of those nights that a couple of the boys came to my dad for help.  They had gotten themselves into some trouble and they most definitely didn’t go to their fathers for help.  My dad would take care of them.  Keep them out of trouble.  And make one of the most vivid memories I have from when I was 6 or 7 years old.

It was late at night, definitely after 8 o’clock.  The phone rang and my mom answered.  It only took a moment and the phone was handed over to my dad.  You could tell that something was wrong, just by watching the expression on my mom’s face and by the questions my dad was spewing AT the phone.  “Where are you at?”,  “How long ago did this happen?”, “Who all knows?”, “Are you sure you killed him?”. Yeah, that last question definitely would scare the bejesus out of most, but you have to remember that killing was common in our house.

My dad put his boots on and hurried out of the house.  My brother and I had tons of questions for mom, but she just brushed it off.  She didn’t want to be involved and more than that, she didn’t want my dad involved.  But he didn’t have a choice.  The teenaged boys from deer camp had called him for help and he went into action mode.

The funniest thing about looking back on these sorts of memories now, as an adult closely reaching the age of 50, is trying to see it from the eyes of my parents.  What was he thinking?  He should have known better than that.  Then I remember:  They were kids too.  My dad couldn’t have been more than 26 or 27 years old at the time, and that only put him about ten years older than the teen-aged boys he had set out to save from whatever treacherous trouble they had gotten themselves into.

It was about an hour later and we saw the lights from my dad’s truck shine into the windows of our living room.  He had made it home and there was another truck pulling in behind him.   My mom met my dad at the side door of the house.  This is another vivid part of the memory.  I can’t remember little details like what people were wearing, or the color of the walls and stuff like that.  I can remember that we had just put an addition onto our house during the summer, just a few months prior.  My dad, most likely with the help of guys from the deer camp, had enclosed our carport.  He had built a beautiful step-down den attached to the old living room.  They had knocked out a wall between the two and even added a wood burning, brick fireplace.  My dad had bought a regulation pool table and that would take over the old living room.  On the back of the carport, there was a closet and my dad had enclosed a hallway that reached from the side of the house into the kitchen.  The hallway was not exposed to the new den.

My mom met my dad in this hallway as he stood in the door with two distraught looking teenagers standing behind him.  I remember him telling my mom that he needed plastic bags to put on the floor.  I also remember wondering what the heck was going on.  My mom was livid.

My dad and the two teenaged boys began covering the hallway with plastic. My mom was arguing with my dad and the whole scene was chaotic.  My mom eventually stormed off and was finished with the situation at hand.  My brother and I stayed on to watch.  Waiting to find out what had been such a big deal that my dad had to hurry off in the middle of the night.  Wondering what the two teen-aged boys from deer camp had gotten themselves into.

After preparing the hallway to look more like something out of a “Dexter” episode with plastic covering every surface possible and duct tape insuring that nothing could get past the plastic, they retreated back to my dads’ truck outside.  We were told to stay inside.

The door swung open again.  One of the teens was holding the door as my dad and the other boy carried a dead deer into our house.  The boys had been out illegally spot-lighting deer and made the costly mistake of killing one.  I am sure my dad had given both of them a tongue lashing for an hour while they snuck into the woods or side of the road or wherever they had gone to retrieve this poached animal.

They hung the deer up by its’ hind legs, right there in the door frame of my moms’ carport closet.  And they skinned and cleaned it right there.  In the air-force suburb town, in a newly remodeled home.  He did it, because that was the code back then.  Take care of your friends and family.  Even if they screwed up.  The picture of that deer hanging in the hallway will forever be burned into my brain.

I learned some things as a young kid that night that would form some of my values and priorities.  That night would most likely shape my subconscious thoughts about how I saw the world for the next 3 or 4 decades.  Even if someone makes a mistake, you should never turn your back on them when they need help.  It is important to have a village.  There is huge value in having second and third moms and dads to turn to for help when you are too afraid to go to your own.  I learned from the anger in my dads’ eyes and voice to NEVER illegally kill a deer.  But most of all, I learned that no matter what, I will never ask Kelly if I can clean a deer in our house.