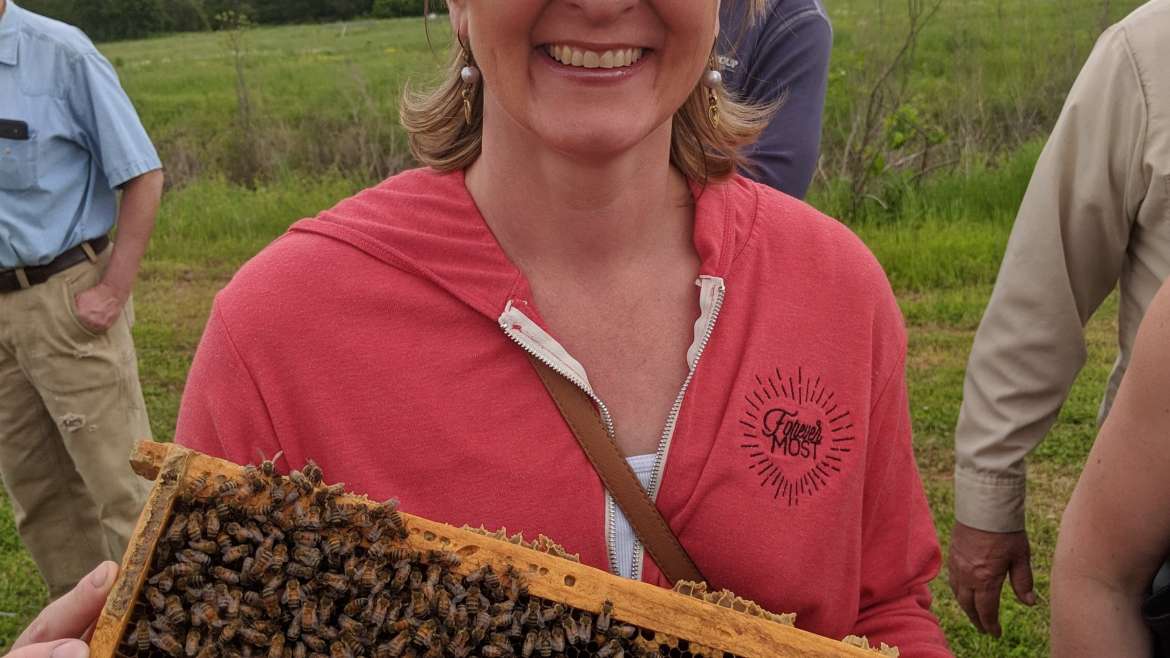 Throughout the United States, there has been a decline in the number of honey bees over the last decade.  The normal death rate of bees should be between 5 and 10 percent per year, but beginning in 2006, that rate more than tripled.  Science has termed this phenomenon Colony Collapse Disorder.  In 2015, it was estimated that as many as 30 percent of all hives were lost annually.  At Forevermost Farms, we want to do our part in reversing this trend.   Even if you do not plan on raising honey bees, you can do your part as well.

In addition to colony collapse disorder, the increase in pesticides, herbicides and insecticides causes neurological problems and eventually death to bees.  In 2012, the European Union voted to ban the use of many of these chemicals in response to studies done indicating that Neonicotinoid chemicals caused problems for pollinating bees.   There have even been unsuccessful lawsuits against the EPA in the United States for failing to take action against these deadly chemicals.

We began going to beekeeper meetings, joining online forums, watching YouTube videos and generally communicating with people who raise bees this year.  Until we emerged ourselves in the honey bee community, we were unaware of some of the vast problems that existed.   At every meeting, class or seminar we attend, there are countless stories of the honey bee demise.  Bee keepers that have been raising bees for decades have reported that their bees have just disappeared or have died at alarming rates.  One beekeeper in White County recently lost 21 hives.  Overnight.

When the average American consumer hears these stories, typically the first thing that comes to mind is the loss of honey as a treat or sweetener.  (Honey is the only food produced by insects that humans consume) This thought process generally leads to an under-appreciated view, due to the fact that other sweeteners exist.  What is generally not taken into consideration is the fact that over one-third of our food crops are pollinated by bees.  Without bees, we could lose many of the crops we love to eat.  At the end of this article, we have included a brief list of plants (many more exist) that would fail to produce without the assistance of bees in the pollination process.

Some interesting facts to consider about the importance of bees in the pollination process:

A watermelon vine produces a male and female flower.  Bees and other pollinators are responsible for moving the pollen from the male flower to the female flower.  The female flower must be pollinated five times before it can produce fruit.  It is also important to note that the female flower only opens from late morning, until early afternoon and the flower is only viable for one day.  If bees are not present during this short window, the flower will not be properly pollinated.   Watermelon farmers know the importance of the honey bee and many “rent” bee hives from beekeepers.

In the state of California, the almond industry accounts for 80% of the almonds consumed around the world.  This is an $11 billion per year industry.  Almond trees are self-incompatible.  This means that each variety of almond trees must cross pollinate in order to produce.  From mid-February through mid-March, the almond tree flowers bloom and they rely on bees to move pollen from one variety to another.  There are roughly 1 million acres of almond trees in California alone.  During these three, short weeks, each acre requires 2 hives of about 20,000 honey bees.  That is 40 billion bees needed just to pollinate this single crop.  Most of these are “rented” hives.

With these statistics in mind, you can see why colony collapse disorder, as well as the use of chemicals in pesticides, herbicides and insecticides can very quickly devastate the foods we eat and the very economy of the United States.  We all must do our own part to protect our bee population.

We recently attended a “Bee Day” that was hosted by Bemis Honey Bee Farm in Little Rock, Arkansas.  This is the sixth year that Bemis has hosted this event.  Between 9am and 4pm, Bemis opened up their farm to the general public.   They had live music, a children’s area that featured animals, games and face painting, food and live bee demonstrations.  The event also featured 21 different classes you could attend on three different experience-level tracts for those attending.  Bemis offered this experience for FREE.

From the moment we arrived, we knew this was an extremely organized event.  Eight different people were stationed throughout the parking area alone, to insure people knew where to park and what direction to go once they arrived.  Bemis had classrooms set up in multiple locations so three different events could take place simultaneously.

We learned about what to do once we took honey bees home and set up our own hives and how to feed our bees to get them started in their new home and how to help them survive over the winter when flowers producing nectar and honey aren’t blooming.  We learned about bee swarms, what causes them and how to react when encountering a swarm.  Demonstrations were given on how to smoke a hive properly, how to identify and mark a queen bee, how to check the hives for pests and disease.  Did I mention that Bemis hosted these classes for FREE?  While on site, Bemis had multiple people available to answer questions about honey bees and we found the employees and guest lecturers very informed and helpful.

Bemis hosts this event, as well as an event in the fall (Arkansas Honey Festival) annually.  If you are interested in honey bees, like a day checking out bee and honey products, want to start raising honey bees or would like to further educate yourself on how to improve your beekeeping skills, I would highly recommend setting these days aside on your calendar to attend the events.

If you can not raise your own hive of bees, you can support your local beekeepers by purchasing local honey products instead of store-bought honey.  Much of the store-bought honey is brought in from China, which is literally watered down and tainted with pesticides, antibiotics and heavy metal contamination.  In 2002, the European Union banned all honey from China.  The US imposed a 300 percent tariff on Chinese honey in recent years, but the Chinese manufacturers use illegal means of exporting honey into the US by transferring their honey to countries like Vietnam and India where it is relabeled and shipped to the US.  It is estimated that one third of all honey purchased in the US is illegally transferred honey from China.

You can also help by insuring that the pesticides, herbicides and insecticides you are using on your lawns and gardens are “bee safe”.   You can also plant flowers that are pollinator friendly.

At Forevermost Farms, we are trying to do our part.  We hope to raise healthy hives and grow our honey bee colonies.  We also have pledged not to use harmful chemicals and to plant as many pollinator flowers and flowering trees as we can afford to grow.  We also want to support companies like Bemis Honey Bee Farm and encourage you all to check out their website, visit their local store or attend one of the festivals they host in the spring and fall.